Already very early on in the history of humanity, ancient scientists and philosophers discussed the nature of the stars that we can see in the night sky. Our own Solar System consists of a single star, rocky planets and gas giants in various sizes, several dwarf planets and dozens of moons. This lead to the century-spanning discussion of whether other stars also possessed their own planets or not - if our Solar System was a unique exception and whether other types of stellar systems would be possible. Greek astronomers and philosophers already hypothesized that the stars we see in the sky are just like the Sun and each represents a miniature system. However, with no data to base actual theories on, it was nothing more than a philosophical discourse. The first discovery of another planetary system, even orbiting a pulsar (Wolszczan, Frail 1992) and shortly after around the main-sequence star 51 Pegasi (Mayor, Queloz 1995) jumpstarted a new field of exoplanets. This field is still relatively new and one of the fastest-growing branches in astronomy. Over the past decade, advances have been made with a continually rising number of exoplanet discoveries and the more accurate study of their properties. We are using two distinct methods for the detection of such planets: 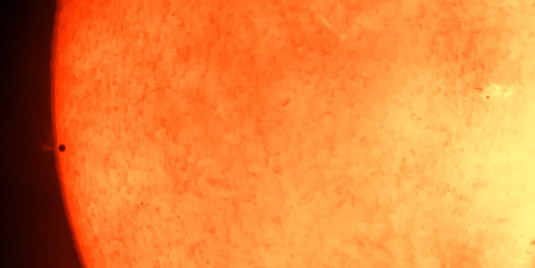 Fig. 1: Transit of Mercury in front of the Sun, taken with the coronagraph on Mt. Wendelstein. An H_alpha filtre was used for a more discernible stellar surface and the image was colourized with a heatmap.

The currently most popular detection technique is the transit method. If the inclination of a planet's orbit is high enough (i~90°), it periodically moves in front of its host star. While this is also the case in our Solar system, as seen in Fig. 1, it is impossible to resolve the actual event for stars, however, the flux decreases and then increases again and this can be measured. A schematic of how a transit occurs is shown in Fig. 2. While this effect only happens for a minority of stars, the probability to be able to witness the transit of Earth for an arbitrarily chosen neighbour star would be 0.045%, and lots of data have to be collected for longer-period planets, it is nevertheless by far the most successful detection method with several thousands of discoveries. The key to that is the high accuracy of photometric cameras and the possibility of observing many thousands of stars at the same time, cancelling out the issue of low transit probabilities. Surveys such as Kepler are able to observe 100000 stars at the same time and, in case of satellites, have complete time-resolved photometry over years without major breaks. Our group has been involved with transit surveys with the RoPACS survey, the Pan-Planets survey, and aims to follow up Kepler- and TESS-survey planet candidates with the Wendelstein facilities.

Fig. 2: Schematic of a transit event (top) and the corresponding effect on the incoming flux for a star with an occurring transit (bottom). Three factors affect the shape which, as a first-order approximation, may otherwise be assumed to be trapezoidal in shape: the geometry of two circular bodies eclipsing each other, their inclination angle i, and the limb darkening of the star.

The radial velocity (RV) method, also called Doppler spectroscopy, has been the most successful detection method for a long time and has only recently been surpassed by the transit method. A planet and its host star orbit around their common centre of mass, meaning that the planet's mass and orbit also influence the star. This motion can be detected since the radial component introduces a blue/redshift in the stellar spectrum due to the Doppler effect and is illustrated in Fig. 3. 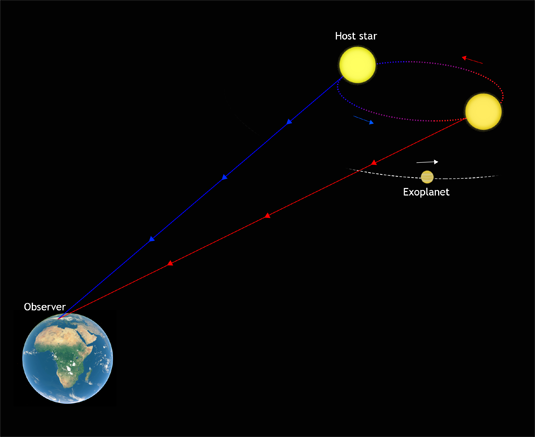 Fig. 3: Schematic of the radial velocity effect. The exoplanet and its host star orbit around their shared centre of mass, meaning that the star is shifting slightly towards Earth and then away again. This movement can be detected with high-precision spectroscopic instruments and accuracies of 1m/s have been achieved.

Necessary for this effect is a high-resolution spectrograph that is able to resolve the needed Doppler shift of 1-300m/s (depending on the planet's mass and orbit) for the current types of detected exoplanets. This is usually done with an echelle spectrograph, a design which can reach a resolution of 90000, meaning that for a given wavelength λ, the smallest resolved difference in wavelength Δλ is 1/90000. Such spectrographs have to be calibrated with extremely calibration sources and the Wendelstein is one of the first facilities worldwide to use a laser-frequency comb for that.

The advantage of the RV method is that, in contrast to the transit method, data do not have to be collected continuously for long periods of time but instead it is sufficient to collect about a dozen data points which are then sufficient enough to exclude many target stars from more precise follow-up. In addition to that, the geometric probability of detecting the doppler shift is higher than for a transit. However, it is not yet possible to observe more than one target simultaneously at such high accuracies, meaning that large-scale surveys are not as feasible as with transit surveys.

Current projects of our group

We are currently completing the results from the Pan-Planets survey, have active collaborations with the K2 survey (that is using the Kepler space telescope) and plan on working with data from the Terrestrial Exoplanet Survey Satellite (TESS) and performing our own RV surveys. Our active instruments are the Wendelstein Wide Field Imager (link), the 3-channel camera 3KK (link), the high-resolution echelle spectrograph FOCES (link) and future instruments at the Hobby-Eberly Telescope (link).