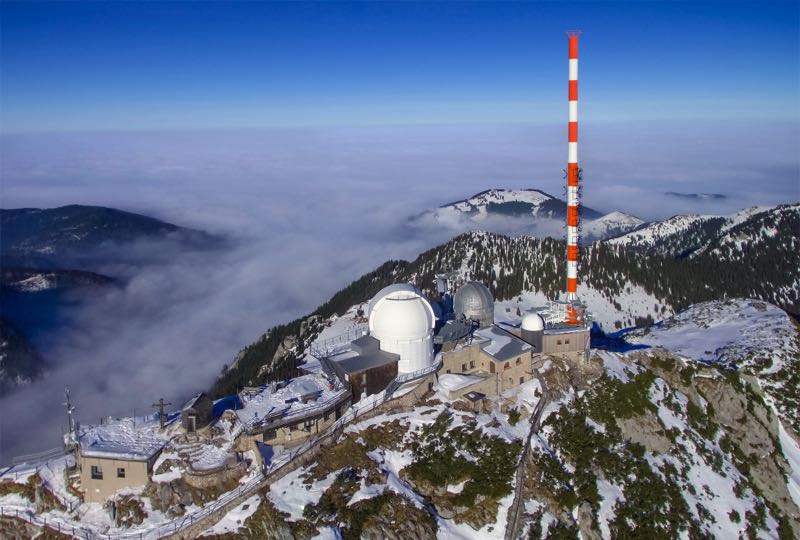 The Wendelstein Observatory is situated on the summit of Mount Wendelstein, a prominent, 1838 m high mountain in the Bavarian Alps. It is operated by the University Observatory (USM) of the Ludwig Maximilian University of Munich.

Only 75 km south-east of Munich, after an hour's drive this site can easily be reached via cable car (8 min) or by means of a cog railroad (25 min.). Final access (personal only) to the very top is achieved by an elevator climbing up 109 m within the mountain. The observatory was first installed to survey the solar activity. In the mid-1980, it was redirected to night observations of stars and galaxies, but it still owns a 20 cm Zeiss solar coronograph. Nowadays, the coronograph is used only for education and public outreach. For the nighttime activity, an 80 cm DFM-telescope was installed which was operated until spring 2008 for scientific observing programs every clear night. It was equipped with high-tech focal instruments like high-speed multichannel photometers or a direct imaging CCD-Camera. This instrumentation has often been involved in international observing programs. In 2007, a 40 cm telescope was installed for the student's lab.

The main scientific facility is a 2 m Fraunhofer telescope installed in 2011 which replaced an older 80 cm telescope. The telescope is equipped with three instruments: an optical wide-field imager (WWFI), a three-channel imager in the optical to near-infrared wavelengths (3KK), and a high-resolution echelle spectrograph (FOCES).