Large parts of the contents of our universe remain unobservable. Dark Matter and Dark Energy make up 95% of its energy content but are only observable through their actions on stars and galaxies. In the case of dark energy this action is even only detectable through the way it affects the expansion of the universe itself. Dark Matter, which doesn't seem to emit any light, affects the dynamical properties of Galaxies. While it also acts on the large scale structure of the universe and affects the way that light propagates through space — its gravitation effectively bends the light rays around itself — it is the observation of the dynamical properties of galaxies that allows us to study its detailed spatial distribution which gives important clues to its fundamental nature. So far the most prominent theories see Dark Matter as being made up largely of one particle or particle class, the Dark Matter Particle, and attribute a temperature to it. The temperature is a proxy for the amount of random motion of the particles, where cold temperatures correspond to little motion and high temperatures to a high degree of random motion, similar to the gas particles in the kinetic gas theory. Simulations show that cold Dark Matter tends to form clumps or halos that show high central density distributions. The high density centers are usually referred to as density cusps. On the other hand, warm Dark Matter models, while still forming halos show shallow central density profiles what is commonly referred to as cored halos. It is these Dark Matter halos that galaxies ultimately reside in and cuspy or cored haloes result in different dynamical properties of those galaxies. Therefore, the observation of the dynamical properties offers insight into the nature of the Dark Matter Particle which has been named at many places one of the highest priority problems of modern astronomy. Unfortunately, also the stars and the gas in galaxies contribute to its gravitational potential. In large galaxies the total mass is generally dominated by the mass of the stars, and consequently the dynamical properties will mostly give account of the spatial distribution of stars in those galaxies. To learn about the dark matter itself, one must study low-mass galaxies or dwarf galaxies where the total mass budget is dominated by their Dark Matter down to the very center. As it happens however, the observation of dwarf galaxies remains a challenge even with the most modern telescopes today. On the one hand, they generally have very low surface brightnesses, often comparable or even lower then the brightness of the night sky itself. On the other hand, their low masses result in relatively narrow velocity distributions of their stars. High-resolution spectrographs are required to measure these velocity distributions which means that the little light that we receive needs to be split into many spectral resolution elements. VIRUS-W is a highly efficient and sensitive spectrograph that was designed specifically to target dwarf and other low mass galaxies, measure their dynamical properties and allow us to infer their dark matter halo density distributions.

Built by the University Observatory in Munich and the Max-Planck Institute for Extraterrestrial Physics, VIRUS-W is currently operated at the 2.7 m Harlan J. Smith Telescope of the McDonald Observatory in Texas. One of the predominant features of VIRUS-W is that it implements a so-called Integral Field Unit (IFU). Other than the usual slit at the entrance aperture of a spectrograph, an IFU delivers spectra in a two-dimensional field of view, a spectrum for every pixel in the image so to speak. This has several key advantages for astronomy such as the ability to simultaneously derive kinematics for every position in a galaxy rather that just along one axis. VIRUS-W’s IFU is constructed from ~300 optical fibers. The fibers are arranged into a rectangular pattern in the telescope focal plane and into a more or less classical slit at the entrance of the spectrograph itself. VIRUS-W is built around phase holographic gratings. The high resolution, stellar dynamics mode grating has a very high line density of 3300 lines per millimeter — note that the line separation is smaller than the wavelengths of light that it observes —which results in a dispersion that is large enough to achieve a spectral resolution of about 10000 (λ/dλ) or 0.05 nm in the main wavelength range of interest. This by itself is actually not a very high number in astronomy. High-resolution spectrographs can have resolutions of up to 100.000 but these are typically targeted at much brighter objects. While those instruments mostly observe stars in our own solar neighborhood, VIRUS-W observes other galaxies. Located thousands of times further away, those typically deliver signals that are also thousands times smaller. 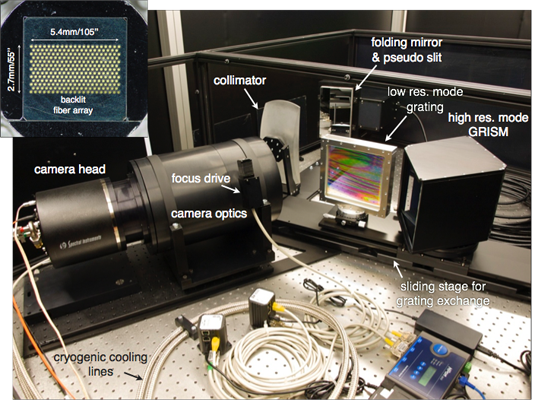 The VIRUS-W Integral Field Unit (IFU) spectrograph that was developed by the University Observatory in Munich and the Max-Planck Institute for extraterrestrial Physics. The IFU (here back illuminated through the fiber slit) can be seen on the top left. The main picture shows the instrument itself. Two gratings (visible to the right) implement the high resolution stellar dynamics mode and the medium resolution stellar population mode. The fast f/1.4 camera of the spectrograph can be seen on the left.

To achieve this, fibers are chosen to be relatively large on sky — much larger than the typical spatial resolution limit of the telescope. This in particular is unusual as most instruments attempt not to downgrade the telescope resolution. But since VIRUS-W is built to observe extended objects, galaxies, this means that the individual fibers integrate over more signal each. In combination with it’s highly efficient gratings and relatively low number of optical elements turns VIRUS-W into one of the most sensitive instruments of its kind.

VIRUS-W’s key science is the study of dark matter halo properties of dwarf galaxies. We conduct several observational programs to measure the dynamical properties of the local dwarf spheroidal galaxy population, and dwarf galaxies in the Virgo Cluster. Furthermore, we study so-called low surface brightness galaxies. While as large other giant disc galaxies, those objects are typically 10x fainter and again are most likely dominated by their dark matter content over large radial ranges.

Left: The core of the globular cluster Messier 13 is just 25 000 light-years away and measures about 145 light-years in diameter. It lies in the constellation Hercules and sometimes can even be seen with small binoculars.
Right: Velocity field of the globular cluster Messier 13, where the velocities range from -5km/s (away from the observer – blue) to +5km/s (towards the observer – red). The solid line shows the rotation axis, while the green arcs indicate the flattening direction measured from the distribution of the stars (from archive data).

But VIRUS-W's combination of high sensitivity and large spectral resolution make it applicable to many other science cases as well. It has been used to study the properties of bulges in spiral galaxies and to infer their formation history. It allowed us to measure the rotation of Milky Way globular clusters and to show that they are virtually all rotating. It has been used to support the measurement of the masses of so called super massive black holes in the centers of giant elliptical galaxies in several cases and it has been used to build up one of the most detailed dynamical maps of any spiral galaxy in existence in a program to measure the velocities of stars and gas in our neighboring the Andromeda galaxy. The combination of these data with detailed photometry allows us to infer its formation history and its 3D mass distribution.

Left: The closest large spiral galaxy in the neighborhood of the Milky Way galaxy. Its proximity of only 2.5 million light year makes it a target of many detailed studies such as the HST-PHAT (https://archive.stsci.edu/prepds/phat/) survey. Right: A panoramic velocity map of the Andromeda galaxy. About 220 individual VIRUS-W observations resulted in possibly the most detailed stellar velocity map of any galaxy in existence.